So we are starting off March strong with another review, I am really trying to keep on top of my reviews and I think I am doing quite well so far. The first book I read in February was Theft of Swords by Michael J Sullivan, the first book in the Riyria Revelations. 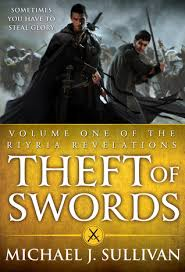 Theft of Swords follows Royce and Hadrian, a formidable pair of thieves who take on impossible missions and between the two of them, get it done. When they are offered a relatively easy mission; to steal a sword before a duel, for a ridiculous amount of money, they ignore the warnings and take it. Framed for murdering the king, they are thrown into an adventure to save a kingdom and the new king.

Theft of Swords is actually two books, originally published on Wattpad and after receiving a huge following; they were picked up by orbit publishing. When you read it, you will see why. It keeps it’s two book structure and each book is it’s own complete story, however they have been paired together really well, telling an overall story between the two books.

Character-wise, I loved Royce and Hadrian; you would never see these two people being friends but they are amazing together. Hadrian being the brute force of the two and Royce being the cunning brain behind the operation. Although these are really developed characters from the very beginning, you do see a lot of development and growth throughout the books, something I love seeing in high fantasy because I find it is often pushed to the background.

I highly recommend this book, and series’ as a whole. They are quite intimidating because of the bind-ups, and I personally listened to this via audible; something I loved because the audiobook was fantastic. I also recommend having the complete trilogy; Rise of Empire and Heir of Novron handy because you are going to want to continue reading!

Get up to date

What are you looking for?